US Tax & Financial Services website uses cookies. Find out about cookies here. By continuing to browse this site you are agreeing to our use of cookies.
×
Contact a Specialist today
Home | Blog | New 2022 IRS Changes: Funds, Partnerships Required Schedule K-2 and K-3 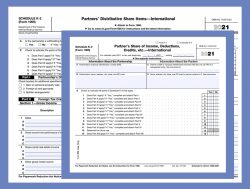 Our Corporate and Business Services practice specializes in reporting for Private Equity and Venture Capital fund structures with US connections and we believe the introduction of these new changes will have a significant impact on us and our clients.

The Tax Cuts and Jobs Act of 2017 (TCJA) marked a tremendous change to US tax reporting. As a result, the tax reporting for pass-through entities became far more complicated. For example, a typical Schedule K-1 prepared for an entity that had international transactions included numerous whitepaper footnotes such as those relating to Controlled Foreign Corporations (CFCs) and Passive Foreign Investment Companies (PFICs). The IRS’ most recent attempt to reduce the volume of these non-standardized footnotes resulted in the creation of new Schedules K-2 and K-3, which were designed to substitute many of these footnotes.

Although Schedules K-2 and K-3 mostly report the same type of information, there is a very important difference between them that needs to be noted from the very beginning. The Schedule K-2 reports foreign transactions on a partnership level and, if completed, needs to be attached to and filed with the partnership (Form 1065), or S Corporation (Form 1120-S) tax return. This form will also have to be attached to informational Form 8865 prepared as part of the individual or corporate income tax return of a partner of a foreign partnership or a shareholder of an S Corporation.

Despite some differences between Schedules K-2 and K-3 attached to Form 1065, Form 8865, or Form 1120-S, the main purpose is shared amongst all three. For this reason, this blog will not go into details on how these three versions differ. All three forms contain a checklist to indicate which part(s) of the Schedule K-2 or K-3 are applicable to that entity or K-1 recipient. Form 1065 Schedule K-2 is the longest one and contains more parts than the other two. Furthermore, certain parts of Schedule K-2 – most notably foreign tax credit limitation, distributions from foreign corporations, or information regarding CFCs – are shared among all three Schedule K-2 versions.

An important aspect of this change is the additional costs that tax preparers are likely to incur in connection with time spent updating the workpapers and getting up to speed with these changes. Tax preparers are going to spend a considerable amount of time and resources to get themselves to a point when they can start preparing these schedules. In addition, certain changes that have already been announced by the Biden administration are likely to affect Schedules K-2 and K-3 in the future, if enacted into law. Potential tax law changes in connection with GILTI or foreign tax credits may impose significant changes to these schedules in the near future and, therefore, create an additional amount of work for the tax preparers.

The IRS has recognized that the introduction of Schedules K-2 and K-3 is a major change to tax reporting for passthrough entities. For that reason, the IRS has provided transition relief by not imposing certain penalties for tax year 2021 Schedules K-2 and K-3 if these are deemed by the IRS to be incomplete or incorrect. The filer must, however, demonstrate that a good-faith effort was made to comply with the new reporting requirements. Based on IRS Notice 2021-39, among other things, a good-faith effort could be established by showing the IRS the extent to which the filer has made changes to its systems, processes, and procedures for collecting and processing information relevant to filing the Schedules K-2 and K-3.

The introduction of Schedules K-2 and K-3 is one of the biggest changes enacted to the pass-through entities and is likely to make a great impact. Tax preparers need to be aware of the change and react swiftly to be able to service their clients during the next tax season which is now just around the corner. Any partnerships or S Corporations affected by this change, on the other hand, are most likely going to see an increase in compliance costs. The main idea behind these schedules is to make tax reporting easier to the end-users of a Schedule K-1 and time will reveal whether the IRS’ move will prove to be a successful one.