How Uncle Sam Gets Most of the Pizza

So, you’ve been living in the US, maybe you were born there, or attended university and then stayed. 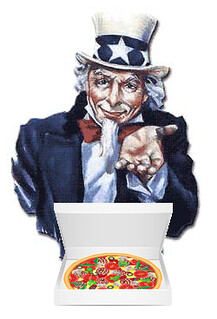 Now you are heading elsewhere in the world. Maybe your spouse wants to be closer to family overseas or a new opportunity opens up; whatever the reason, you’re going to expatriate.

Your old friend “Uncle” Sam calls you, “Let’s have a little party before you go, meet me at the pizza parlor.” So, a party for you, feels great! You often end up picking up the tab when you get together with Sam, but this time should be different, it is your farewell meal.

At the agreed-upon time, Sam is at the pizza parlor, with a large pizza in front of him; the pizza is cut in ten slices. He is already eating four of these at once (40% of the pizza), this is Uncle Sam’s excessive style. Meanwhile, you get drinks, napkins, you’re a civilized person after all. By the time you are ready to eat Sam is done with his first four slices and is hungrily eyeing the remaining six slices.

“Ah, gee, I’m sorry I took so much and didn’t wait.” Sam says, “I’m just anxious with you leaving; not sure what I’ll do when you’re gone, but here, I’ll only take a little more and leave the rest to you.” Suddenly, Sam points behind you and exclaims, “Look, it’s Roger Federer!” You turn, to see someone wearing a tennis polo but otherwise bearing no resemblance to Roger Federer.

When you turn back to Sam you find that despite his reassurances, he is again taking a lot of the pizza. He has taken two more slices and cut a third slice in half while you were distracted, essentially taking about 40% of the remaining pizza (so he has taken about 60%-64% of the total pizza).

Some farewell party this is! Sam knows this is your favorite pizza and still he took over half of it and then left you with the bill too! It seems your dear friend Uncle Sam doesn’t want you to leave and is going to make it painful to do so.

Now, replace pizza with your total worldwide estate and your old friend Uncle Sam with the US government and you have an idea of what the proposed Ultra-Millionaire’s tax, including an exit tax, will be like. Elizabeth Warren and a few colleagues from the House have proposed a federal wealth tax. This is classic Robin Hood tactics and no matter your personal political or economic thoughts on the issue the idea currently has broad support within the United States.

So, what is this wealth tax? It is a proposed annual tax that targets the wealthy, specifically those with over $50 million in worldwide assets. Read that again, worldwide assets, not just US assets. Such households will face an annual tax equal to 2% of their household asset value. If you have over a billion in assets, then you are looking at a 6% tax on amounts over $1 billion.

This proposal includes: (i) an increase in the IRS enforcement budget, (ii) a minimum (but undefined) audit rate for those subject to the tax, and (iii) a new 40% exit tax on net worth of anyone who renounces their US citizenship (and the use of FATCA and IGA data to uncover individuals who would be subject to this exit tax).

You know who is an even easier target for taxes than rich Americans? Rich American citizens who are expatriating! They won’t even be able to vote (post expatriation), so the arrangement is perfect!

This is the part of the proposed wealth tax covered in the pizza story above. Essentially, any US citizen who expatriates and has over $50 million in assets will be hit with a 40% wealth tax. Not pleasant, but the argument may be that if you stayed put you would face the estate tax at similar rates when you died.

Here is the fun twist, you may not be escaping the estate tax even after expatriation. Depending on your expatriation status and who you make gifts or bequests to, another 40% tax could be payable by the recipient.  As an expatriate, any gifts or bequests you make to a US resident or citizen will be subject to a 40% tax.  This how you end up with only about 4 out of 10 slices of pizza.

There is already an exit tax in the US. It applies to citizens and certain long-term residents. If they have over $2 million in assets they are taxed on the unrealized gains of their assets upon expatriation.

Several strategies exist for planning for this tax. You can establish a trust of which you (as the to-be-expatriate) are not a beneficiary. Assets within the trust will not then be part of your household assets and therefore escape the tax. So, you save money by not being able to use it (though your family can).

Other potential strategies are highly dependent on the specific circumstances of the expatriating individual.

An individual, Eric, with a small business valued at $25 million; retirement and investment accounts of $10 million, and real estate and other assets totalling $12 million

A business founder, Sue, with a large stake in a public company; total household assets valued at $300 million

A few examples of the exit tax portion of the proposed legislation:

An individual, Eric, with a small business valued at $25 million; retirement and investment accounts of $10 million, and real estate and other assets totalling $12 million; decides to expatriate.

A business founder, Sue, with a large stake in a public company; total household assets valued at $300 million; decides to expatriate.

Currently, the wealth tax is simply a proposal. Biden’s administration stated its view of tax reform differs from Warren’s. Some U.S. constitutional scholars argue a federal wealth tax constitutes a “direct tax”, which is unconstitutional and therefore invalid; big surprise – others argue the opposite!

While this is only a proposal right now, the current expatriation process often takes several months to process. If tax planning is desired, such planning is best performed several years in advance of actual expatriation.  Even if this proposal does not become a law, it does highlight that rich individuals expatriating are a popular target for revenue raising. The current exit tax (taxing gains on most assets of expatriating individuals with over $2 million in assets) is quite punitive. Based on the current proposal the situation for expatriates is unlikely to improve in the near term.

The best time to address potential entanglements with US taxes is before being subjected to them. If you have any questions about investing in the US, working there, or potentially immigrating into the US please reach out to discuss the matter.

[1] All individuals in these examples are US citizens.
[2] The existing expatriation law applies to certain individuals with assets over $2 million in value.